Recently I have experienced a truly remarkable case story involving the use of Farabloc for phantom limb pain management. 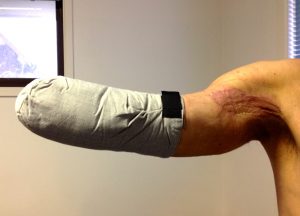 Farabloc was developed by a German Engineering student Frieder Kempe in the late 1960s to combat phantom limb pain. His father who lost a leg in WWII could predict rain with increased phantom pain and so Frieder theorized that this was due to the increased frequency of the Electromagnetic Field in our earth’s atmosphere that occurs during a low pressure system. He soon realized that his fathers amputated limb had little protection against these external electromagnetic fields (EMF), which cause atmospheric and environmental fluctuations, due to damaged nerve ends, poor skin and compromised connective tissue. He designed a shield and created his own version of a Faraday Cage, which is made of iron arranged in a grid pattern.  This is a physical shield that completely blocks external electrical fields, and the concept is still used today in MRI machines to keep the room free of radiation.  After many years of research and development this shield now comes in the form of a linen like material (‘Farabloc’) which consists of a series of ultra thin metal fibres woven into a nylon fabric.  The Fabric is made of 9.5% steel wire consisting of iron, nickel and chromium.

These high frequency electromagnetic fields can aggravate nerve ends and cause the cells in our body to become unstable which may result in certain types of chronic pain.  Studies have suggested that changes in EMF may modulate calcium dynamics at the cellular membrane. They also have shown that farabloc significantly reduces the levels and release of CPK (Creatine phosphokinase) inflammatory enzymes known to produce pain and cramping in muscles.

Farabloc is washable and may be used repeatedly.  Its best used as a double layer, and is available in limb covers, gloves, jackets, socks, wraps and blankets.

To learn more about Farabloc visit their website on www.farabloc.com, where they are able to produce extensive research and clinical trials using this product

Having learnt about Farabloc 8 years ago I have used it successfully to treat phantom pain in a range of hand injuries, from a single digit amputation to multiple trauma.  I commence the use of Farabloc in extensive amputation injuries as soon as their wounds are healed, under compression wraps/garments, to dampen their phantom sensations/pain and also as a preventative measure.

When I first meet GR 4 months after his injury, he was consumed with bilateral severe debilitating phantom pain. He was initially treated in a large metropolitan hospital by quite an extensive team of specialists and allied health professionals. From GR’s account no one had known of or thought to trial Farabloc, so I felt obligated to spread the word about Farabloc, its applications and what an impact it can have on phantom pain sufferers.

GR’s list of pain medications was extensive and he relied heavily on sleeping tablets to gain a few hours sleep. Given this was an electrocution injury and phantom pain often relives the last sensory input, I felt I could not accurately describe this pain relieving journey that Farabloc has provided.  So in the spirit of a Marathon runner that he has become GR has kindly offered to share his experience with using Farabloc.

I am a “Live Linesperson”.  This means I work on “live” high voltage power lines and I have been doing this particular job for over 10 years.  I have been in the electrical industry for nearly 30 years. 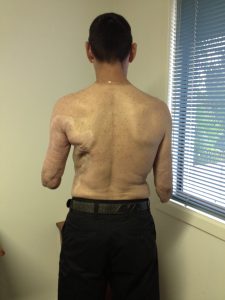 On 14 January 2013 I went to work and it was like any other day.  Nothing out of the ordinary, the weather was fine.  Except on this day, something went terribly wrong, I don’t know what happened, I can’t remember the actual incident, but I was working on top of the power pole when I was hit with 11,000 volts of electricity.  I didn’t lose consciousness but I was in absolute agony (a pain I will never forget).

I was in hospital for 91 days (7 of those in ICU).  I sustained injuries to my torso and arms.  The electricity went through my hands and exited my chest.  I had 13 surgeries and had both forearms amputated at the elbows.  I am an upper limb bilateral amputee.

Phantom pain is so real and all consuming. I would rate my pain at around 9 (out of 10).

Nights were the hardest because I couldn’t sleep.  Nothing seemed to relieve my phantom pain.

Whilst I was in hospital I was on a lot of mediation.  I was taking about 40 pills a day and these are just the ones I can remember

I also saw the Chronic Pain Department at the hospital and had four IV Lignocaine infusions.  That helped relieve some of the phantom pain for a couple of days but it didn’t last.

About a month after the lignocaine infusions I then had three IV Calcitonin infusions.  This had little effect on my phantom pain.

In April I was sent to a rehabilitation centre. I was there to improve my mobility, endurance, balance and to try and gain some independence. During this time I was weaned off the opioid analgesics because they made little (if any) difference to the phantom pain.

I still was not sleeping (because of the phantom pain) even with the Temazepam.  I felt like a zombie during the day because of the pain and sleep deprivation.

I finally came home on 22nd May 2013 and I was on the following medication:

I still experienced phantom pain all the time and the Clonidine and Temazepam at night would help me get a couple of hours sleep.

I first heard about Farabloc from Carla my OT after I was discharged from hospital.  She asked if I had any phantom pain and suggested I give it a go.  After one week of wearing Farabloc my “hands” were finally starting to relax and they stopped trying to “kill” each other.

I could finally get some sleep.  I stopped taking the Clonidine and Temazepam because I no longer needed them.  I have also reduced my Endep intake from 150mg to 100mg at night.

I don’t get as much phantom pain now; I seem to have phantom “experiences”.  Instead of my hands holding a double-edge sword they now seem to be holding a soft sponge or it is like my hands are sitting in a “soft jelly”.

The phantom pain has never completely gone away (and I don’t think it ever will), but life is so much more bearable.  I would now rate my phantom pain a 3 to 4 (out of 10) on a daily basis.

I now get a good night’s sleep, every night, with no additional medication and this has made the world of difference to my quality of life.

I have no hesitation in suggesting that you try Farabloc if you suffer from phantom pain.  It has helped me immensely.  The best thing about it is that it is simple to use and there are NO side effects.

I feel so much better knowing that with continued use of Farabloc my phantom pain may reduce even further as time goes by and this gives me a lot of hope for the future.