WHAT IS TRIGGER FINGER? 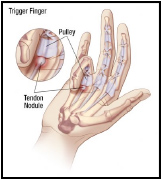 Trigger finger or trigger thumb (also known as stenosing tenosynovitis) involves the pulleys and tendons in the hand that bend the fingers and thumb. The tendons work like long ropes connecting the muscles of the forearm with the bones of the fingers and thumb. In the finger, the pulleys are a series of rings that form a tunnel through which the tendons must glide (similar to the guides on a fishing rod though which the fishing line travels). These pulleys hold the tendon close to the bone. In trigger finger, the pulley at the base of the finger is often thickened and the tendon has difficulty gliding freely through the pulley. Additionally, the tendon may develop nodules or swelling of its lining. When this occurs, the tendon often gets stuck and can produce a popping or triggering sensation as it moves through the thickened pulley. This appears as the finger being “stuck” in a flexed position (as pictured).

Patients often need to be fitted with a splint to reduce the swelling around the tendon and its sheath. You may also be required to perform a series of exercises to assist with maintaining your movement. Patients should avoid activities which involve a sustained grip and repetitive squeezing.

Doctors may also prescribe oral anti-inflammatory medication, which may be a useful adjunct to reduce swelling. If pain caused by the “locking” and swelling remain, some patients may require a steroid injection into the site which can be effective in relieving the trigger finger/thumb.

If none of the above approaches provide relief, surgery may be recommended. In surgery, the pulley is released to allow the tendon to glide freely, without “triggering”. Patients can usually begin moving their hands normally immediately after surgery. You may need hand therapy after your surgery to assist with wound/scar management, swelling and range of motion exercises to ensure optimal outcomes.